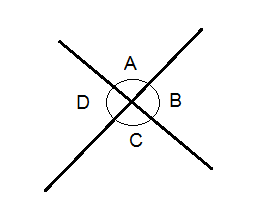 Vertical angles are always congruent, which means that they are equal.

Two angles are said to be complementary when the sum of the two angles is 90°.

Two angles are said to be supplementary when the sum of the two angles is 180°.

When a transversal intersects with two parallel lines eight angles are produced. 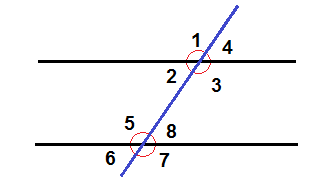 The eight angles will together form four pairs of corresponding angles. Angles 1 and 5 constitutes one of the pairs. Corresponding angles are congruent. All angles that have the same position with regards to the parallel lines and the transversal are corresponding pairs e.g. 3 + 7, 4 + 8 and 2 + 6.

Angles that are on the opposite sides of the transversal are called alternate angles e.g. 1 + 8.