Heredity is the passing on of traits from parents to their offspring; either through asexual reproduction or sexual reproduction, the offspring cells or organisms acquire the genetic information of their parents. Through heredity, variations between individuals can accumulate and cause species to evolve by natural selection. The study of heredity in biology is genetics.

Identical twins have exactly the same DNA, but they are not exactly alike. Each twin has his or her own personality, talents, likes, and dislikes. There are even diseases that appear in one twin but not the other, including arthritis, diabetes, autism, schizophrenia, cancer, and many others. The differences between identical twins don’t come from DNA—they all come from external factors.

A dimple (also known as a gelasin)[1] is a small natural indentation in the flesh on a part of the human body, most notably in the cheek or on the chin. 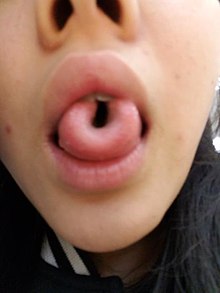 This article is about human tongue rolling. For tongue rolling in cattle, see Vacuum activity. For the movement disorder, see Tardive dyskinesia.

Tongue rolling is the ability to roll the lateral edges of the tongue upwards into a tube. The tongue’s intrinsic muscles allow some people to form their tongues into specific shapes. Popular belief holds that variation in this ability is the result of genetic inheritance. Rolling the tongue into a tube shape is often described as a dominant trait with simple Mendelian inheritance, and it is commonly referenced in introductory and is genetic biology courses.[1]

There is little laboratory evidence supporting the hypothesis that tongue rolling is inheritable and dominant. In 1940, Alfred Sturtevant observed that ~70% of people of European ancestry could roll their tongues and the remaining ~30% could not do it.[2] A 1975 twin study found that identical twins were no more likely than fraternal twins to both have the same phenotype for tongue rolling.[3]

Cloverleaf tongue is the ability to fold the tongue in a certain configuration with multiple bends. To the extent to which it is genetic, it is probably a dominant trait distinct from tongue rolling.[3]